- Learning theories: Learning can be made without iteratively tuning (articial) hidden nodes (or biological neurons).

1) Learning are made layer wise (in white box)

Is there a general learning scheme for wide type of different networks (SLFNs and multi-layer networks)?

It is clear that the learning speed of feedforward neural networks including deep learning is in general far slower than required and it has been a major bottleneck in their applications for past decades. Two key reasons behind may be: 1) the slow gradient-based learning algorithms are extensively used to train neural networks, and 2) all the parameters of the networks are tuned iteratively by using such learning algorithms. 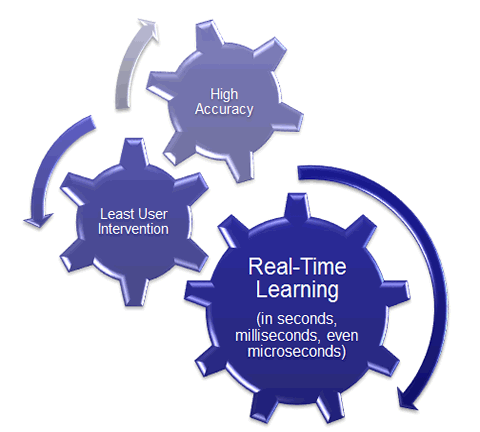 Filling the gap among different SLFNs:

There are many types of SLFNs including feedforward networks (e,g., sigmoid networks), RBF networks, SVM (considered as a special type of SLFNs), polynomial networks, Fourier series, wavelet, etc. Those are considered separate and different algorithms before. However, ELM actually fills gaps among them and proposes that it needn’t have different learning algorithms for different SLFNs if universal approximation and classification capabilities are considered.

Different from Deep Learning, all the hidden neurons in hierarchical ELM as a whole are not required to be iteratively tuned

ELM theories show that hidden neurons are important but need not be tuned in many applications (e.g, compressive sensing, feature learning, clustering, regression and classification). In theory, such neurons can be almost any nonlinear piecewise continuous neurons including hundreds of types of biological neurons of which the exact math modelling may be unknown to human being. ELM theory was confirmed in biological systems in 2013. 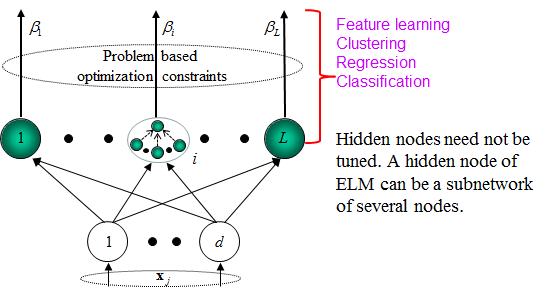 Rosenblatt dreamed that perceptron can be "the embryo of an electronic computer that will be able to walk, talk, see, write, reproduce itself and be conscious of its existence” and Neumann felt puzzled on why ``an imperfect (biological) neural network, containing many random connections, can be made to perform reliably those functions which might be represented by idealized wiring diagrams.” There exists significant gap between them. From ELM theories point of view, the entire multi layers of networks (artificial neural network or biological networks) are structured and ordered, but they may be seemingly ‘‘messy’’ and ‘‘unstructured’’ in a particular layer or neuron slice. ‘‘Hard wiring’’ can be randomly built locally with full connection or partial connections. Coexistence of globally structured architectures and locally random hidden neurons happen to have fundamental learning capabilities of compression, feature learning, clustering, regression and classification. This may have addressed John von Neumann’s puzzle. Biological learning mechanisms are sophisticated, and we believe that ‘‘learning without tuning hidden neurons’’ is one of the fundamental biological learning mechanisms in many modules of learning systems. Furthermore, random hidden neurons and ‘‘random wiring’’ are only two specific implementations of such ‘‘learning without tuning hidden neurons’’ learning mechanisms.

Top 1 is on deep learning. ELM was listed Top 2 in the list

A talk on AI in a high middle school

WHO behind the malign and attack on ELM, GOAL of the attack and
ESSENCE of ELM